If you think that this article has an exaggerated clickbait apocalyptic headline, please read on.

Cambridge Analytica – a mass manipulation on the individual level

Cambridge Analytica was a British technology company specializing in data mining, data analysis, including strategic communication during elections in multiple locations around the world. Unlike a traditional marketing firm helping to win the political candidates in question, Cambridge Analytica’s campaigns were completely targeted on the individual level of each voter. Cambridge Analytica boasts a number of successful projects in various states where it has influenced elections – the most successful ones include Brexit or the election of Trump. Whether you are an Oklahoma white heterosexual who is afraid of immigrants or a homosexual living in California – you both see a completely different customized ad for choosing Trump (in the first case, immigrants steal your job, in the second, Muslim immigrants want to introduce the Sharia and radically restrict gay rights).

Cambridge Analytica was the global leader for manipulating voters, reaching out mostly undecided voters. Knowing in detail their characters, behavior, preferences and, in the end, their decision making, it was able to reach them with the best direct advertising and “play on their chord”.

To be able to accurately reach the voter, Cambridge Analytica needed his or her data, so-called “data points” that clearly identify each person (such as Facebook groups that he or she likes). In December 2015, Cambridge Analytica boasted of having 5000 data points for 220 million Americans (that’s enough to know their decisions better than their own parents).

Collecting data points for Cambridge Analytica wasn’t such a problem. Especially when Facebook gave them the opportunity to harvest them. Of course, without the consent of its users. According to Cambridge Analytica, this involved 30 million user profiles, according to Facebook it was almost 87 million user profiles. Last year it was a huge scandal because the vast majority of users disagreed. Today, no one remembers that and Facebook’s position on the market practically stays without a threat.

Impact on the democratic social system

The authors of The Great Hack documentary are well aware of the huge potential of Cambridge Analytica – the fact that technological corporations can dramatically influence the outcome of any democratic election. They see it as a serious threat to democracy. And we can agree with them.

They see the solution in tighter regulations or prohibition of this kind of business or in the introduction and enforcement of new human rights – the “right to personal data”. The regulators managed to sink Cambridge Analytica, Facebook survived it, but Damokl’s sword of the regulator still hangs over it, similarly over Google (Dr. Robert Epstein on Big Tech Censorship).

I will try to explain a number of serious reasons why this approach will not work and the beginning of the end of a democratic society is close:

If any technological company (Cambridge Analytica, Facebook, Google, ..) can influence the opinions of tens of millions of people for the benefit of a particular political candidate and the activities of these companies cannot be stopped and know-how to be forgotten, then we need to rethink if we can afford to live in the system of democratic society based on an extremely easily influenced political opinion.

Introduction One day you wake up to a beautiful green day. There is a rainbow in the sky. You take in the beautiful view of the mountains, breathe in the fresh morning air. You look Read more…

It often happens that someone comes to Parallel Polis with a “wallet”, from which they have trouble paying at our terminal. In fact, the user is confused by the term wallet and exchange (or “custodial Read more… 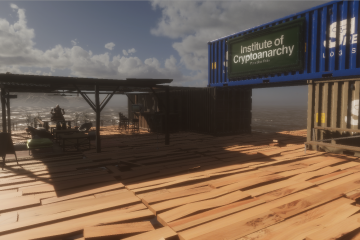